Now the exterior of the house is not required to be imposing and unapproachable, as it used to be. However, the most popular Roman decoration of facades is still more than in demand for the cladding of country houses. Today we will tell about the use of rustic stones - the favorite finishing material of Italian architects of the XV century and Russian masters of the time of Peter the Great. 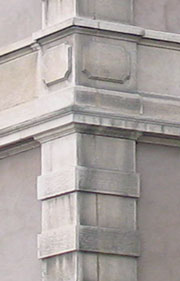 The term «rustication» is used by architects to refer to two things - the finishing stone itself or the dividing strips between stones (including - drawn on plaster). There are many forms of rustication stones: the outer walls of buildings were usually faced with tightly lined quadrangular stones, the front side retained the texture of the «wild» stone, but remained roughly hewn (or hewn roughly), and at the edges they were surrounded by a narrow smooth band. Archways were made of trapezoidal stones. Rustics were sometimes made of bricks or planks, and then painted in two colours. Today, the corners of houses are increasingly smooth regular plates of artificial materials, and with the advent of rustic plasters, it became possible to simply draw them on the facades of houses.

The Rustic style (from Latin rusticus, "simple, rude, rural" or from rus, "village, countryside") became popular during the Renaissance among Tuscan craftsmen. They took inspiration from Roman buildings, where stone (still without smooth edges) was used to cover those architectural parts that were supposed to give the impression of solidity and massiveness (the plinths of houses, towers, bridges, aqueducts and other more or less significant structures). In the streets of ancient Rome rustic has also had a purely practical application: it served as a protection against the blows of passing on the narrow streets of the carts.

Italians are creative with their own heritage and along with natural hewn stone began to use for finishing facades stucco imitation stone, stucco imitation of stucco lime tuff and just plaster to reproduce rustic - imitation of the breakdown of the wall in rectangles or bands. Brilliant examples of rustication can be found in Florence - Palazzo Vecchio, Palazzo Riccardi-Medici, Palazzo Strozzi. The Palazzo Pitti, on the other hand, demonstrates the new possibilities of rustication: the unsteady and fluid style of Mannerism required architectural forms of lightness and a whimsical interplay of light and shadow. Thus diamanti (or diamond) roust was born, with a "diamond" cut of stones (a fine Russian example of the style is the facade of the Facade of the Faceted Chamber in the Kremlin).

Russian architects became interested in rustics at the turn of the XVIII century during the epoch of Peter the Great Baroque and Russian classicism, that is why both the historic center of St-Petersburg and small merchant mansions in Moscow are often stylized as Florentine palazzos of the Renaissance, showing fine examples of French rustication with deep horizontal incisions.

Today the rustication stones are used in finishing only as a decorative element, i.e. performs only an aesthetic function. And so the need to use natural stone fall away: it is too much load bearing walls, it is difficult to dismantle, and it is very expensive. It was replaced by a lightweight artificial stone of polyurethane, polystyrene foam or architectural concrete. Such a rustic may have a different shape and texture, they are lined corners of buildings, windows and doorways and smooth parts of the facades. It can be easily combined with almost all types of wall coverings and looks equally fine with masonry, bute, plaster and even siding. Rustic panels are used today to decorate the corners - 3-4 rustic panels, combined in a vertical detail: they allow for facade stone cladding to greatly simplify the installation of decor. So, having changed the main function from protective to decorative, the rustication continues to be one of the most visible and sought-after elements of the facade finish.

Rust
A quadrangular stone for wall cladding, can be rectangular, square, trapezoidal with chamfered or right angles.
Rustication
Decorative treatment of walls, which looks like a masonry of large stones. It may be in the form of horizontal bands of equal height in relief and projecting above the background.
Rusticated plasters
A modern finishing material, is a different shaped stones separated by rustic joints. The surface of the stones may be smooth or textured, in different colors and shades. Rustic can be wide and narrow, smooth and with elements of architectural breaks.
Marble (stone) plasters
Finishing material, which includes a filler of granite and marble crumb, which when split gives a sparkling chip. They are used for finishing plinths and facades.