Who was the first to engage in architectural visualization? In architecture there has always been the task of visualizing the architect's plan. We remember that precise knowledge was the privilege of the shop, of the caste, but in the relationship between architect and client (often represented by the rulers of nations or states) there had to be an intelligible pictorial language, accessible to the warrior, the merchant and the rich farmer, not restricted by territory or tribe.

In Egypt, on one of the wooden panels from the walls of the tomb of the architect Hesir, the basics of the system of linear dimensions used in construction (about 2800 B.C.) are recorded. In Russian civilization, the system of architectural size relations under the name "babylon" is known.

In the finds of the ancient Indian culture in Bahia de Caracas, archaeologist E. Estreda found neatly molded houses and figurines. Some figurines depicted bearded people sitting in a typically Japanese pose - with their legs crossed. And the roofs of the toy houses had curved corners, like those of Asian pagodas.

The clay houses found in the area between the Dnieper and the Carpathians and the Balkan Peninsula can be considered the most ancient of the "visualized" in the volume form constructions. Here is what the academician B.A. Rybakov says about them in his book "Paganism of the ancient Slavs": 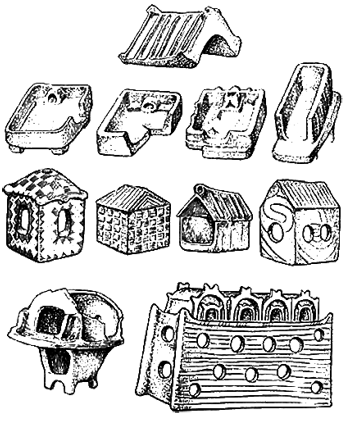 Mesolithic (10 to 15 thousand years BC) agricultural tribes, both in the Balkans and to the north of them, in the zone of Indo-European colonization, have preserved a whole layer of archaeological documents. These are various clay models of huts, sometimes giving us the external appearance of the building with its vertical pillars or with smooth painted walls, sometimes revealing to us only the interior of the house with stove, benches and even utensils (maqotras, millstones).

In the Eneolithic period (8-5 thousand years BC) a simplified form of clay models appeared: instead of three-dimensional, volumetric houses, they were sometimes satisfied with flat clay plates, which gave only the outline of a house with a gable roof. These plates marked round windows and the upper crosshairs of the rafters.

Of particular interest for its over-word solution to the image of a gable-roof house is a clay plate from the outskirts of Plovdiv. The plate is square, and the gable roof is shown not by the outline of the plate, but by the pattern on it. On the two opposite sides of the plate are triangular gables of the house, topped on princes by extremely stylized figures with arms raised to the sky. The sides show the vertical supports of the walls (or the side slopes of the roof?). This ability to give a sweep of the three-dimensional house on the plane shows a significant work of thought by the artists of the time.

Most of the models depicting the structure as a whole give us the appearance of a stylized gable-roofed house. Southern huts are shown as smooth-walled, mud-bricked (often decorated with patterns); the more northern models reflect real pillar houses, where the gable roof was kept on strong vertical pillars, and the piers between the pillars were filled with wicker shields-methods. The roofs of southern huts (obviously, thatched) are pressed down by thin poles, while the northern ones clearly show solid rafters.

In addition to conventional huts, there were models of two-storeyed structures with a box roof (Rassokhovatka in the Ukraine) By making such items masters did not want to show the exact size of the building, but they could give a general idea of the house, especially about its appearance, the ratio of the sides, number and location of windows, roof design, the main facade, as well as design features, if the house was supposed to be built in a wet place ("chicken legs").

Only in the Middle Ages European researchers of optics and painting have developed a system of visual perspective. Leonardo da Vinci, and his teacher Verocchio are among the authors of the work. The most comprehensive work that summarized previous experience was written by Brunelleschi. From this time the paintings gained relief and depth. Drawing began to be used as a transitional: from conception to creation.

With the development of electronic means of construction of drawings, vector images and programs to create three-dimensional objects in virtual space, it became possible to show the customer close to reality idea of the architect, designer or builder, at any stage of the design or construction of a building. The basis of 3D-visualization is mathematical methods of perspective building and displaying the physical characteristics of materials.

Electronic and paper drawings, photographs, catalogs and magazine illustrations can be the basis for such construction. And, of course, the knowledge of an experienced visualizer.

This method allows you to see the structure in its final form and built into the living environment even at the stage of paper design, to check the usability, the beauty of interior and exterior design, allows you "try on" the furniture you like in the space of the house, to make virtual cuts in the house, to check the coherence of the premises of different levels or to identify in advance the "weak spots" in the project. Computer visualization allows you to organize the correct lighting, see the house and interior rooms at different times of day, beautifully and expediently arrange the adjacent landscape.

Visual aggression in architectureWhy should we think about the beauty of architecture
This article was written by associates of facade design studio.