Brick is one of the most durable materials, and it is not as boring as those who grew up surrounded by standard five-story buildings of silicate stone. Expressive possibilities it lies not only in the modern possibilities of color, but also in the masonry, so that already at the stage of planning a house is worth to think, what you see your country "family nest": the texture combined with a pattern, features dressings and relief elements can turn your house into something like a princely castle, a futuristic object, striking its lines, or in a cozy manor, which causes memories of the Mediterranean villas.

Our new review is devoted to a story about the possibilities of decorative and artistic masonry of face bricks.

First of all, let's answer the question of what decorative bricklaying is for.

For pure beauty! The possibilities of face masonry leave room for self-expression. Among the cozy and pleasant, but quite standard modern projects of a country house yours will stand out with its bright decor or the courage of lines, and the finished house exactly gets its own name in the manner of historic buildings: "house with lilies", "house with an angel", "Gothic", "with a ladder" - in general, the house with a twist!

The main methods of brickwork are three: direct, decorative and artistic (relief).

Talking about decorative masonry requires knowledge of some of the construction terms is not because the laying of the wall will have to do it yourself. The ability to speak the same language as a specialist allows you to quickly and accurately agree on what you want, because not everything that our imagination offers us, has the necessary performance characteristics.

Binding - a system of laying bricks, in which the joints of the lower row is placed, so that they overlap the bricks of the upper row. The simplest masonry - when the full dressing of longitudinal and transverse vertical joints is carried out in three to five rows.

Bricks laid in the wall across (outward short cut) is called the head (perpend) joint, laid along (long cut) - bed joint. The wide side of the brick is called bed; a continuous horizontal layer of similar bricks or stones that are bonded with mortar in a masonry structure and is one unit high - course. 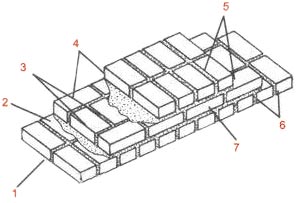 The names of bond originally came from the names of the brick surfaces. Course of bricks that are all laid as stretchers is strecher bond, also called a running bond. Heading Bond - course of bricks that are all laid as headers on the faces. In Old Russian masonry (often called Gothic) in course of stretchers and headers alternate, and each header is located in the center below the embedded stretcher.In english bond alternate stretching bond and header bond courses, with the stretcher vertically located symmetrically between the two headers.

Today, the options for facing masonry is much more, and the use of bricks of two colors expands the possibilities of masonry almost infinitely.

The most familiar and simple way to create a decorative facade - straight masonry: by the thickness and color of the joint, the surface (smooth, colored, textured) of the brick itself you can create a unique exterior facade.

The most popular types of direct masonry single-color bricks:

One of the most popular masonry systems today is called Bavarian masonry because it was born in the German states. Even in the same batch, the bricks have different shades of color, which is what craftsmen began to use to give the facade a special expressiveness. Classic Bavarian masonry is carried out of four shades of facing bricks of the same or different textures. Typically this brick is a black-brown, brown, dark red and red, but if desired, this series can be expanded.

The technique is simple: the horizontal row is laid out of bricks of all shades of color in a chaotic order; in the second row the color alternates in the same order. Not allowed two one-color bricks against each other, and to give the facade integrity, the vertical joints in each row should coincide. Laying bricks in a certain pattern is also possible.

The result is a facade which is original and not dull, but also not mottled.

The possibilities - decorative brickwork with colored and textured bricks.

Decorative masonry is often called a brickwork with a clear geometric pattern of joints (dressings) on the facade or a combination of a certain pattern of joints with colored, textured or embossed elements. It really is a simple and extremely effective way to create a beautiful surface from ordinary bricks. Decorative patterns usually cover the ends of buildings, partitions, under the eaves and other prominent areas of the walls.

Strengthen the effect of decorativeness can be achieved with glazed bricks, which are embedded in a certain or as if randomly in a regular masonry of textured or smooth bricks.

The texture of the bricks makes a huge difference in masonry. A fluted surface will accentuate the expressiveness of the brickwork and create the atmosphere of an old house that has survived many centuries. "Rough" texture with a chipped stone surface is usually used to finish massive parts of the building - plinths, retaining walls, pylons. Rough texture is used for finishing walls of higher floors, partitions, cornices.

Let us show the most common variants of flat ornaments obtained by single-row (chain) masonry with the use of bricks of different types:

A few words about the joints

The quality of masonry depends largely on the treatment of seams: they stand out on the surface of the walls, shading the identity of the ligature of bricks. Without a clear identification of seams plane wall becomes inaudible, masonry dotted in the eyes, so depending on the purpose, type of brick and artistic problems apply different types of joints (Fig. 3). The feasibility of one or another option is worth discussing at the design stage.

Facing brick. ClassificationFacades with a three-dimensional structure
This article was written by associates of facade design studio.