Thinking about decoration of your country house, our customers often ask for advice on how to solve forged decoration elements. Forged practically there are no style barriers, the choice of pattern for a lattice or fence is determined only by expediency and taste of the owner. Their style depends on the general idea of a country residence, which means it will be very useful to have an idea of the characteristics of artistic styles.

The Romanesque (from Latin romanus - Roman) style, inherently deeply medieval, is characterized by thoroughness and massiveness. "My house is my fortress" - this is about Romanesque buildings. So, and wrought iron products carried the stamp of the "defensive" mission: the gate and lattice were massive, composed of set at an angle or vertically set square bars. Gaps between bars were filled with symmetric spirals, and such decorations neatly filled the entire surface of the lattice.

The characteristic pattern consists of scrolls: they grow from a single thick root, intercepted by a clamp; the development and connection of the scrolls is strictly symmetrical and periodic; large scrolls are either densely arranged or have in the center a flower made of small scrolls.

The Gothic style that replaced it was a fundamentally new phenomenon in culture. Gothic gave birth to sharp spikes and tops, clefts (the connection of two bars, where one goes through the other), narrow gaps between the bars, but the curl (volute), as not consonant with the new aesthetic, almost disappeared. The bars of fences usually end in arrows. 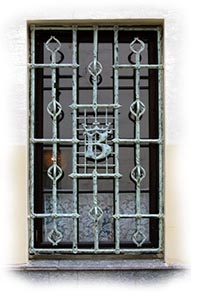 Gothic forged order is based on parts of a circle, the form itself is very geometric. But interior grids are often decorated with delicate gilded plant ornaments. Among the favorite motifs are cut trefoils, lilies and rosettes, stylized acanthus leaves, crucifers (four-leaf clovers), woven into openwork geometric ornaments.

Forging becomes characterized by the use of a complex profile rod. The intersection of individual rods is made out either by punching or cold riveting (in the case of flat rods). For decoration, a leaf billet is used, from which curls, leaves or characteristic trefoils can be made.

The characteristic features are

The Renaissance breathed new forces and ideas into the art, and the advent of the round rod literally untied the hands of blacksmiths. Magnificent spirals were formed from it, ramifications turning into leaves and flowers at the ends, which were performed by hot forging without riveting. Where the bending rods crossed, a slot (piercing) was made into which the rods were threaded - thus the characteristic "figure of eight" was born. The result was the emergence of a strong but lightweight lattice.

The usual tetrahedral rods, as well as round and thin flat rods and iron strips served as the initial material for lattices. Volute, spiral, plaiting and saber-like leaves became their favorite decorations. The decor of lattices was getting more complicated: they were supplemented now with stamped or cast busts, figures and flowers.

The most recognizable Renaissance style was called Baroque (in Italian "pretentious, strange"). Its main difference is the nonobservance of the rules of Renaissance harmony: emotional effect on the spectator seems to be much more important for the artist. Baroque abounds in lots of decorative leaves, rosettes, it is characterized by complex shapes and intricate patterns. Decorations are the same spirals, volutes, wattles and saber-shaped leaves, but turned into magnificent tangled thickets. Naturalistic flowers, acanthus shoots and leaves, cartouches, palmettes twisted into festive garlands, lush curls, vases, masks and dragons become recognizable attributes of the style. The dominant element is once again the curl, and with it spirals into a C-shape. The glory of the Baroque was formed by St. Petersburg grids and fences designed by G. Rastrelli.

The Rococo style, a frivolous heir to the Baroque that prioritized decorativeness. Strict lines are broken up, grids are lightened, thin rods and leaves are used in the forging, giving an elegant playfulness to the forms. Ornament patterns become asymmetrical and fractional, randomly placed S- and C-shaped curls, bouquets, festoons and garlands fill all the free space. Rocaille ornament is characterized by filigree execution, and nonstop movement of shoots, lush garlands of leaves and flowers give volume to the plane. 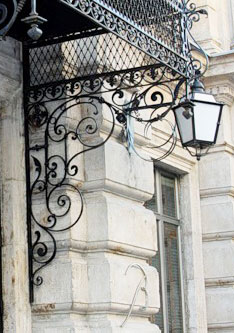 Classical style (from lat. classicus - exemplary) replaces baroque in the mid-18th century and although by inertia it still preserves the decorativeness and plasticity characteristic of baroque, it has a completely different spirit. The austerity and laconicism of expressive means it borrows from antique sources and in wrought iron lattices henceforth the rhythm of clear sections prevails. The lance-like tops of the bars, the graphic nature of the contour line and their harmonic integrity with the architecture return to the decor (remember the fence of the Kazan Cathedral in St Petersburg). Recognizable elements of the style are meanders (ornament with a pattern in the form of broken at right angles straight lines), rectangles and circles with ornamental rosettes inscribed in them. Forged products are often gracefully complemented by cast elements.

The Empire style wrought ironwork is distinguished above all by the use of straight smooth bars and the predominance of geometric elements in the ornamentation. The favorite motifs of the Empire wrought iron are smooth straight lines, circles and meander in combination with the classical acanthus leaf and floral ornamentation. Volutes (curls) take on an elliptical (elongated) shape; often one sees paired volutes that stretch parallel to one another and are welded and twisted at the ends into a simple cochlea. In the center of the volute there may be a floral festoon of acanthus calyxes. The same motifs are repeated along each of the belts of the product, especially characteristic of the Empire alternation of plant elements with meanderings or other geometric patterns.

In the early twentieth century in the decor of forged (and not only) products disappear clarity and laconism, it becomes more and more bizarre and complicated. Thus was born art nouveau. It is characterized by plastic, deprived of angles outlines with a pronounced tendency to asymmetry. In the drawings dominated by natural plant motifs, especially revered exotic flowers - irises, orchids. So, the "visiting card" of the art Nouveau style in Europe was the line, called "whiplash" - loop-shaped curved stem of a cyclamen.

In wrought iron products lines and scrolls freely flow into each other, the ornament with lots of curves, intersections (often with a change of section profile) almost does not repeat along the entire length of the product and leaves the impression of bewitching ease.

Art Deco - "geometric" variant of art nouveau, opposing its "floral" direction. Rounded corners, strict vertical lines, linear geometric decor of zigzags, circles, triangles, suns are characteristic of Art Deco. Often there is a combination of motifs from the Ancient East and Egypt, the Greek classics, floral and animal forms with abstract figures, superimposed on the expression of broken lines. The feminine and rounded is sacrificed to the masculine and graphic. The style became very popular (especially in America) as a symbol of the new luxury and is still considered the style of the stars.

Forging in Questions and AnswersForging. Glossary of terms
This article was written by associates of facade design studio.